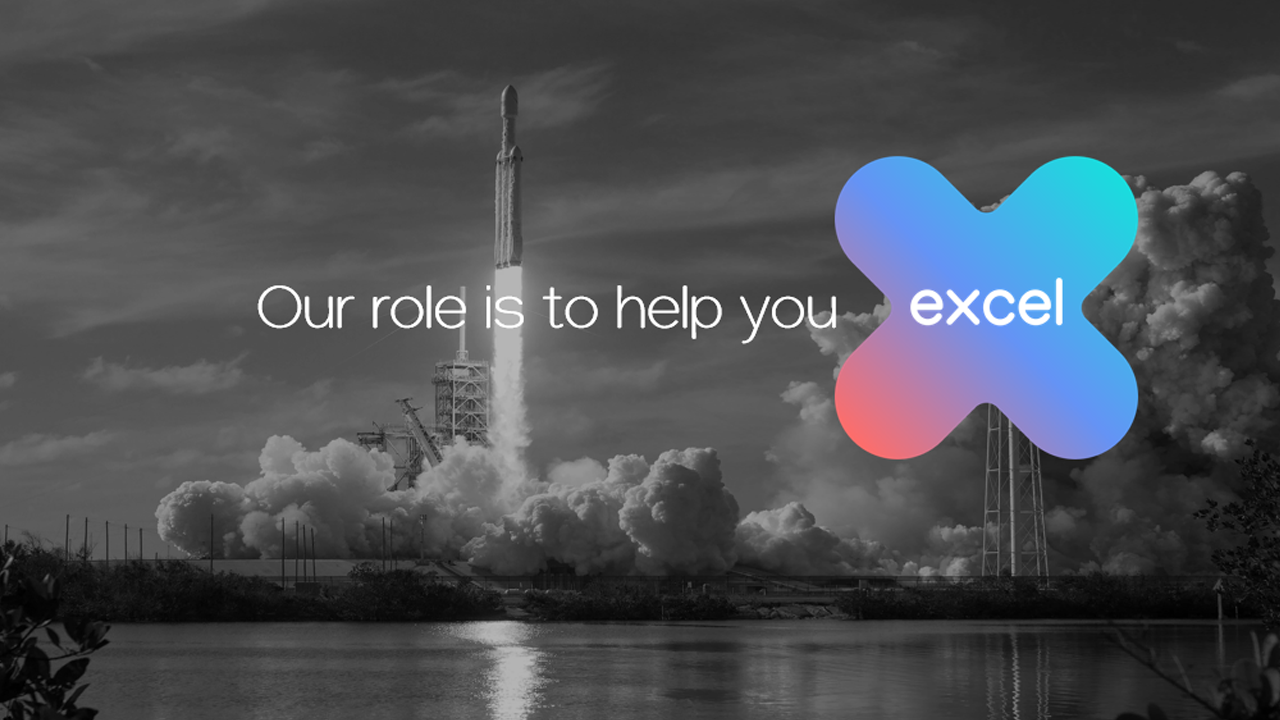 This year has been another challenging one across our client’s sectors, with most managing pent up to demand and growth through a COVID environment. As we enter 2022 with uncertainty, Our clients and candidates have been inspirational throughout 2021, deploying innovative solutions in product delivery, new ways of shopping and managing large teams working from home. A special mention must be given to the hospitality and entertainment industry, trading with ever-changing rules and fluctuations in consumer demand.

Our guide this year reflects on how much the world of work is changing and having to adapt due to the crisis in the shortage of staff brought on by the pandemic. The pandemic caused a shift in people’s priorities to create the ‘Great resignation’ or ‘Great re-evaluation’. While 65% of employers indicated pay rises are in play, income is no longer people’s only priority when it comes to their careers. Training & development opportunities, flexible working conditions, company culture and tangible benefits such as pension schemes, healthcare insurance and career progression are becoming just as important, along with, of course, agile working conditions.

There is no question that Covid has brought many challenges, but it has also widened the talent pool due to the flexibility around scheduling remote interviews and the increased ability to work from home. Employers say that attracting the right talent with the right skills will be the biggest challenge in 2022. With Economic growth forecast at 7% for 2022, the real question is… Will companies be able to source and recruit the talent that they need to fill these roles?

In this current climate, employers need to set their employer brand apart from the competition in the same way that they differentiate their products and services. It is expected that demand for recruitment services will be even more heated in. This won’t change any time soon.

Staffing will be the biggest challenge for our clients across all our sectors. 2021 brought soaring salary costs in transportation with our Driver hourly rate doubling. In healthcare One in Five Nurses want to leave front line services whilst the lack of experienced staff in hospitality will be catastrophic when the sector finally re-opens, the Chef crisis replaced by the Kitchen porter crisis. We look forward to supporting our clients through all these pressure points.

You can view the full salary guide by clicking Salary Guides 2022.

To discuss these findings or to chat to Excel Recruitment about how they can help you with your staffing requirements, please get in touch with us at info@excelrecruitment.com or call 01 814 8747. 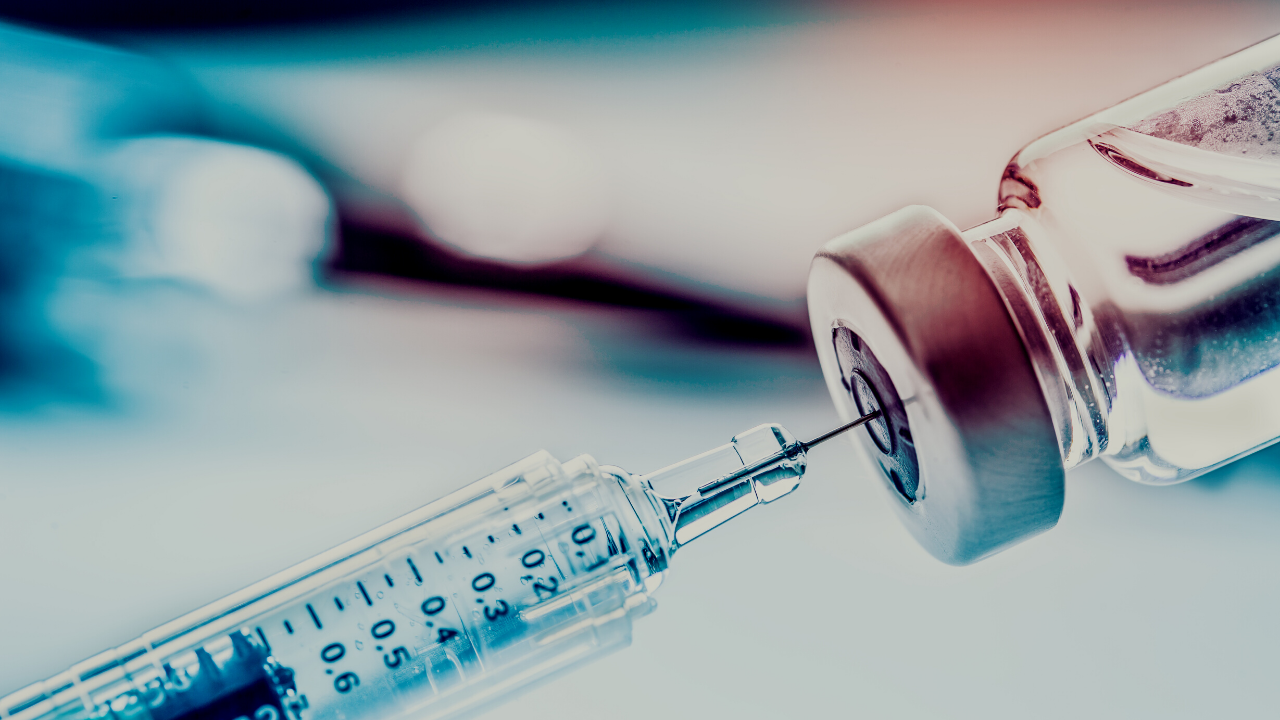 Excel Recruitment is proud to assist with the nationwide Covid-19 vaccination rollout in any small way we can. We have been contacted by several leading pharmacies across the country to recruit Vaccination Pharmacists to play a vital role in protecting the country against Covid-19. Here, at Excel we have written extensively about how well-placed pharmacists are to be a key part in the vaccine rollout, which is why we’re so proud to be assisting in the recruitment of these roles.

What do you need to apply?

In order to be eligible to administer vaccines as a Pharmacist, you will need to submit the following:

If you or anyone you know may be interested in these Vaccination Pharmacist jobs, please don’t hesitate to get in touch with Barbara Kelly, our senior Pharmacist recruiter at barbara@excelrecruitment.com or call 087-7379636.

To view all of our live pharmacist jobs, click here.
[/et_pb_text][/et_pb_column][/et_pb_row][/et_pb_section] 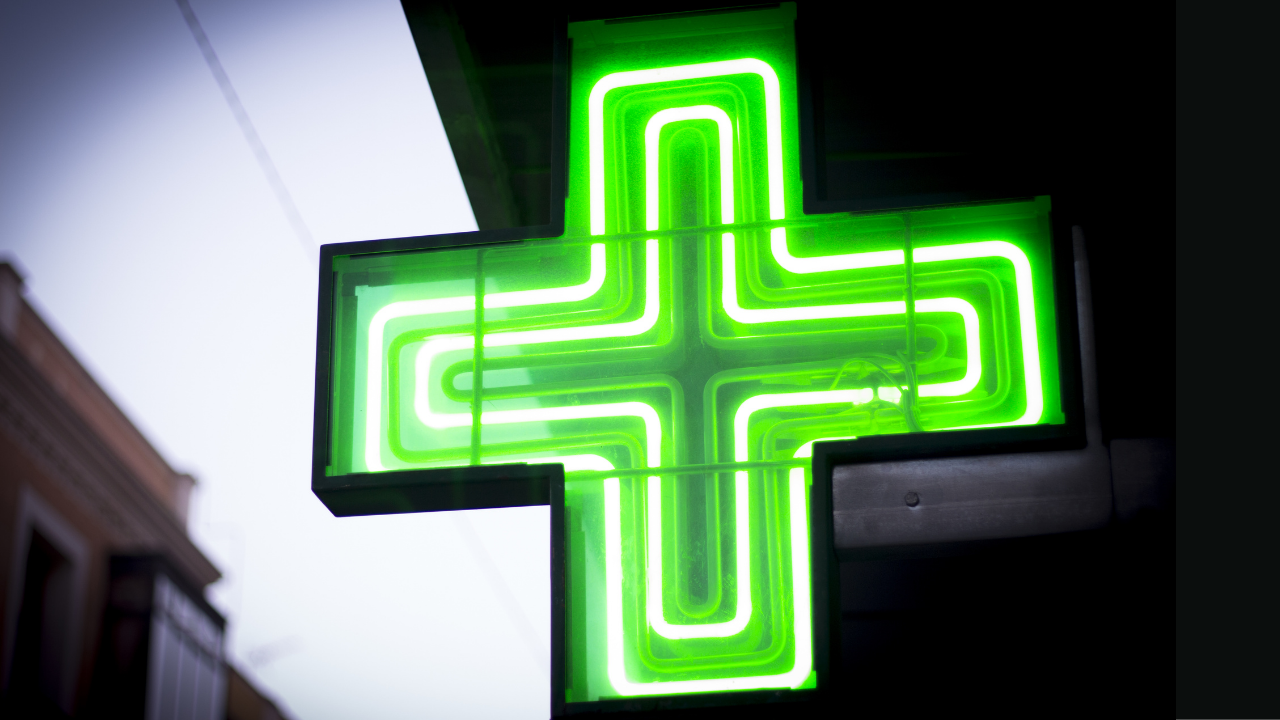 Barbara Kelly, Pharmacy Recruitment Consultant reflects on the frustration of Pharmacists still being in the dark about the vaccine rollout…..

Vaccines: the much-anticipated light at the end of the tunnel that was has been a strange and stressful time. While there was bound to be stumbling blocks to the Government’s initial plan published late last year, one of the biggest frustrations so far is the lack of direction for Pharmacists as to what should be their key role in the plan.

According to a recent announcement from the Irish Pharmacy Union, over 1,850 pharmacies across the country are “ready and waiting” to vaccinate people, but are “in the dark” as to when they will be involved.

Numerous pharmacists are ready to go since the Government announced their plan last year only to be left in limbo now.

IPU secretary general, Darragh O’Loughlin, said “pharmacists are increasingly frustrated at the complete lack of clarity on when they can begin vaccinating their patients and the broader public”. He said there is also frustration among patients. “Pharmacists are trained, experienced and ready to start vaccinating in every town, village and community around the country. They, and the people in their communities, urgently need clarity on when they can start vaccinating.”

What’s such a pity about the current lack of clarity is, as anyone within the pharmacy community knows, is how well-placed pharmacists are to be a key part of the vaccine rollout. Pharmacists have been vaccinating people against the flu for the last decade, and are already using procedures allowing them to monitor patients for 15 minutes following the injection.

Local community pharmacies in small towns and regions everywhere can support their customers who can’t or may not want to go into bigger areas or bigger vaccination centres. They’re available for everyone to go to. Community pharmacists know their customers so well and have a level of rapport and familiarity with the local population that can’t be matched in larger centres. They are the ideal ‘friendly face’ for those who are nervous, have questions or are unsure about taking up the vaccine when offered. All of these factors surely have the knock-on effect of getting as many people vaccinated as possible, as quickly as possible which makes it even more frustrating that pharmacists nationwide are still waiting for answers.

For all our live Pharmacist jobs, please click here 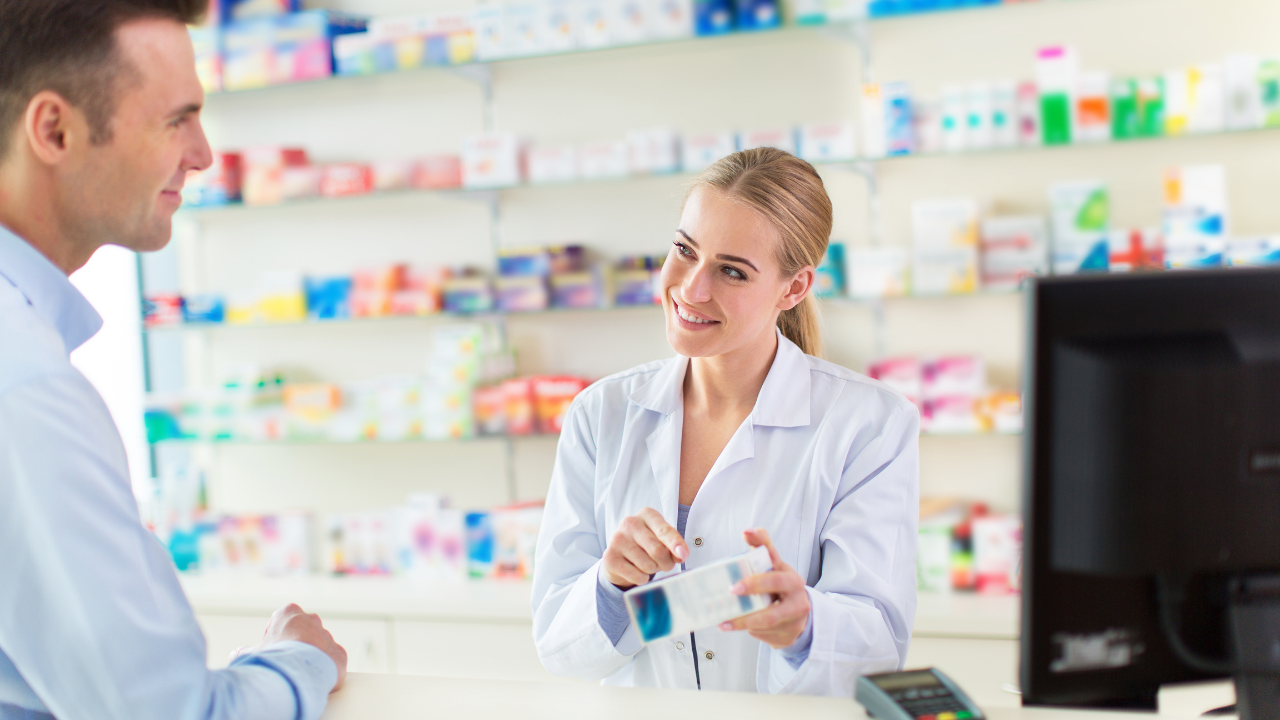 Think working as a locum Pharmacist isn’t for you? From 1 or 2 days of cover to longer-term bookings, locum work is as diverse a career as our pharmacists and clients are. Being a locum pharmacist means whatever you want it to mean for you and your life. Still not convinced? Our Pharmacy consultant Barbara Kelly tells us just why a Locum career with Excel Recruitment should be your next step….

The major difference in locuming with Excel compared to with others? Weekly pay. Our vast experience providing temporary staff in all sectors means we manage the logistics and admin of getting you paid for your hard work seamlessly. Rather than waiting and having to keep track of all your hours over the month yourself, with Excel you get paid for your shifts the following week.

Being a locum gives you back control over your career and working life. In Excel, you work with our consultants, letting them know where and when you want to work, what you enjoy – and what you don’t. All while letting them take care of the details to get you working. Rates and working hours are agreed before you start any shifts, which means you choose the pharmacies that suit you best, can plan your work around other life commitments or take last-minute shifts, only if and when they suit.

As we said earlier, as an Excel locum pharmacist you choose what your work life and your schedule look like. Work patterns can vary as much or as little as you want, and most importantly is this is never set in stone. Want to work full-time this month and then only weekends next month? Have a young family or studying for a masters or PhD? As long as you communicate what you’re looking for with your consultant, you can work as much as you want, in whatever schedule suits your personal/ home life and take as many holidays as you wish!

A common misconception about locum work is that there is no time to grow your knowledge. The opposite is true. The knowledge and experience you gain as a locum is something you can’t get anywhere else. Working as a locum means, you can work in such a wide variety of different location and be exposed to different environments, customer profiles, ailments, team environments and management styles. Experiencing such a variety can come in really handy experience when making future career choices and it also allows you to better network and make connections. Above all, stepping outside what you’re used to, lets you become a more rounded and ultimately, better pharmacist.

If you have any Pharmacy recruitment requirements or are a Pharmacy professional considering a new job, get in touch with Barbara today at barbara@excelrecruitment.com or call 01-8148747. View our live Pharmacist jobs here

[et_pb_section fb_built=”1″ admin_label=”section” _builder_version=”3.22″][et_pb_row admin_label=”row” _builder_version=”3.25″ background_size=”initial” background_position=”top_left” background_repeat=”repeat”][et_pb_column type=”4_4″ _builder_version=”3.25″ custom_padding=”|||” custom_padding__hover=”|||”][et_pb_text admin_label=”Text” _builder_version=”3.27.4″ background_size=”initial” background_position=”top_left” background_repeat=”repeat”]As all of us across the country continue to work against the spread of COVID-19, government instructions continue to be to stay home, stay healthy, and work from home if you can. At Excel Recruitment, we work directly with clients and candidates on the frontlines of this crisis dealing directly with the needs of the public. For all these fantastic workers (including our own temp team) in healthcare, retail, warehouses, supply chain and more, working from home isn’t an option. So for those on the frontlines right now: what can be done to mind both your physical health, mental health, and to stay healthy overall? 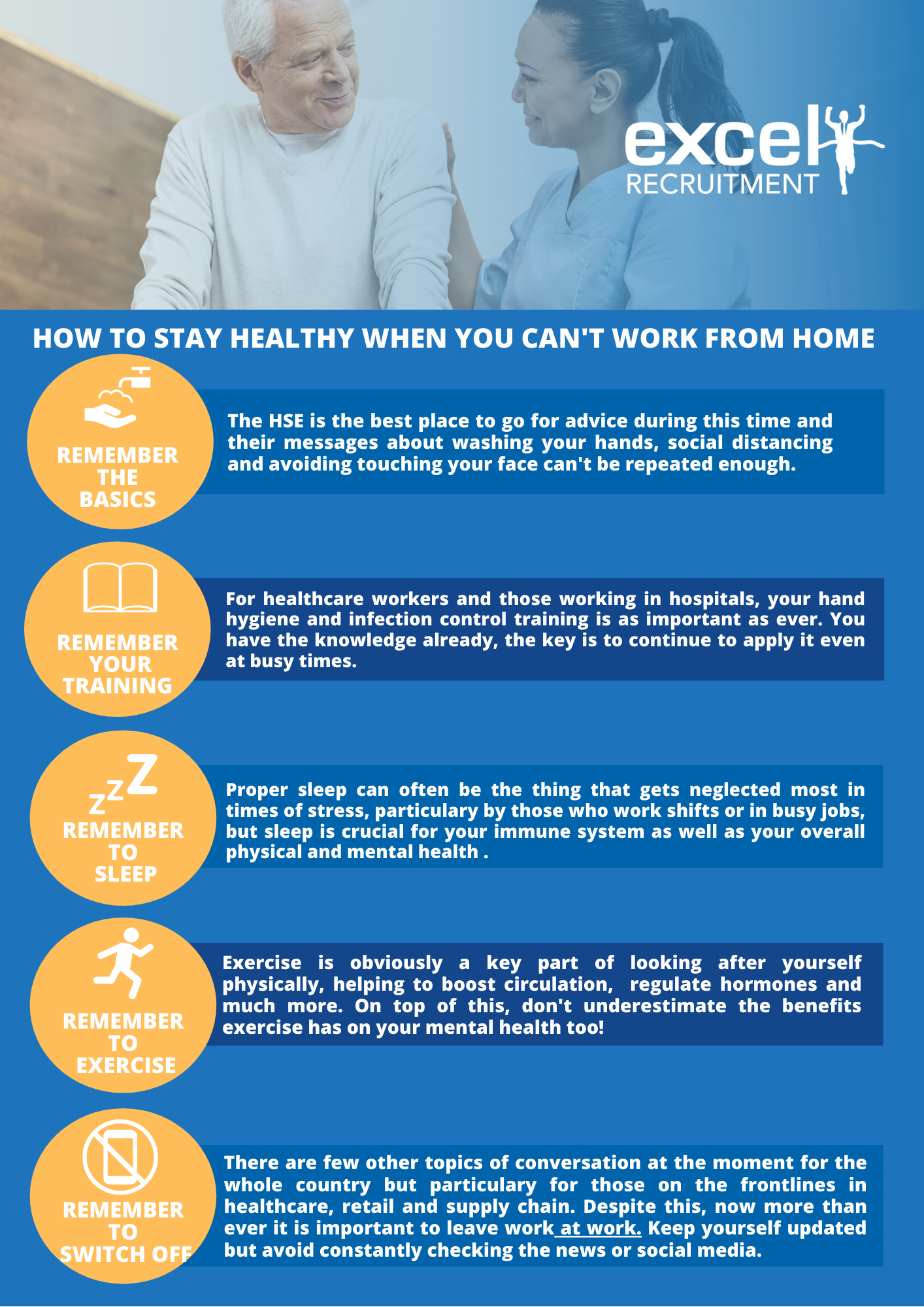 Due to the success of Excel Recruitment’s pharmacy division, we are set to go even further in meeting our client’s needs by launching our locum pharmacist service.

We are proud to work with some of the largest pharmacy companies in Ireland, as well as independents across the country. Now alongside meeting client’s permanent pharmacist and pharmacy technician needs, our expert team of recruiters will now provide short-notice, weekend, holiday or illness cover quickly and seamlessly, ensuring no disruptions to service for clients and their customers. Our team understands you need timely and effective resourcing solutions and can consistently provide standout locum solutions.

For pharmacists, our locum desk offers you weekly payment and the chance to have full control over your working life. Our locum coordinators will work closely with you to understand your preferences around shift patterns, working hours and locations while taking care of the details needed to get you working as a locum. We are receptive, responsive and reliable.

Leading our Pharmacy recruitment division is Barbara Kelly, a hugely experienced and dedicated specialist recruiter. Barbara has over 10 years’ experience directly recruiting Pharmacists and Pharmacist Technicians on a locum, permanent and contract basis. Barbara understands like few others other the particular demands and challenges of recruiting within the Pharmacy industry.

If you are a pharmacist looking to join a progressive, pharmacist focused locum service, register with us today by contacting Barbara Kelly at barbara@excelrecruitment.com or calling 01-8148747 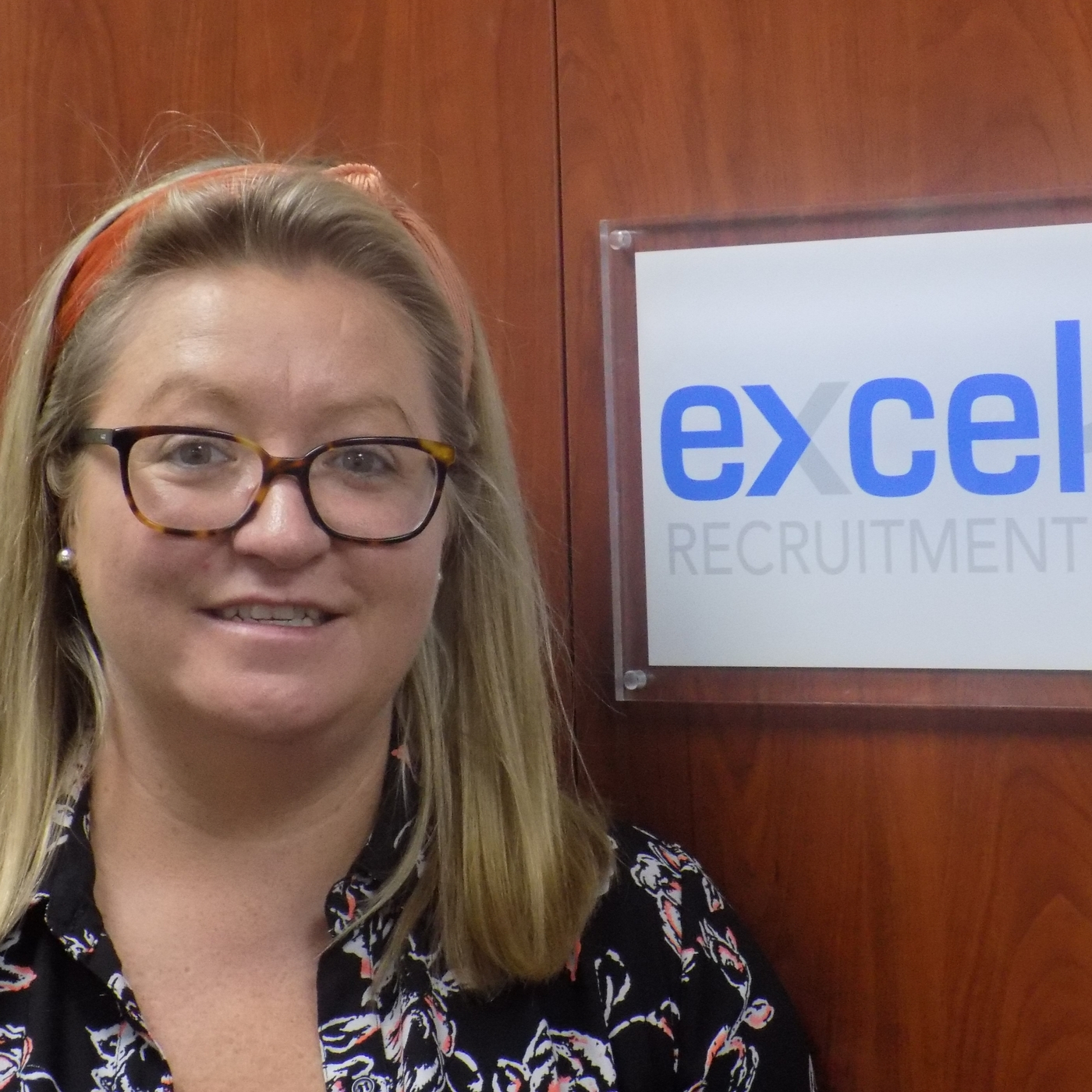 Excel Recruitment are delighted to announce the opening of our new specialised Pharmacy recruitment division.

At the helm of our Pharmacy recruitment division is Barbara Kelly, a hugely experienced and dedicated specialist recruiter. Barbara has over 10 years’ experience directly recruiting Pharmacists and Pharmacist Technicians on a locum, permanent and contract basis. Her knowledge and experience of the industry is unparalleled and her proven successful track record recruiting Pharmacists speaks for itself. Barbara understands like few others other the particular demands and challenges of recruiting within the Pharmacy industry in Ireland and is uniquely qualified to understand and meet her client’s needs.

CEO Barry Whelan says “The move to a defined specialist division will allow our Pharmacy team to concentrate specifically on pharmacy recruitment with greater focus and improved search and selection capabilities for permanent roles along with providing contract and locum personnel solutions. We are very excited to have Barbara Kelly, a hugely talented and insightful recruiter join the Excel Recruitment team. Barbara’s own approach to recruitment aligns directly with Excel’s business values of honesty, loyalty, not being greedy and building long-term, stable relationships.”

If you have any Pharmacy recruitment requirements or are a Pharmacy professional considering a new job, get in touch with Barbara today at barbara@excelrecruitment.com or call 01-8148747